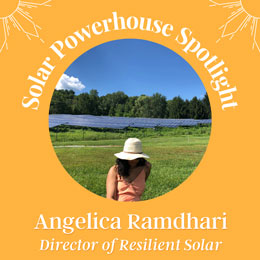 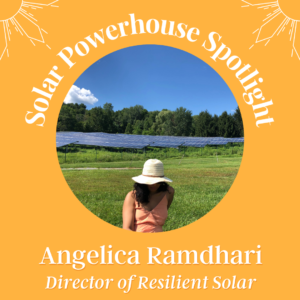 Clean and renewable energy is an ever-growing, expansive field encompassing numerous technologies and approaches. In this blog post, we’ve narrowed down the conversation to one crucial topic – solar resiliency and battery power. In this special edition of our Solar Powerhouse Spotlight blog series, Marigo Farr, Multifamily Solar Program Manager sat down (virtually) with Angelica Ramdhari, Director of Resilient Solar for a dive deep on all things solar resilience, environmental justice, power outages, and accessibility of battery backups and storage.

*This interview has been edited for clarity and consistency.

Marigo Farr (M.F): What communities are served through GOSR (Governor’s Office of Storm Recovery) projects, and do these neighborhoods overlap with environmental justice communities?

Angelica Ramdhari (A.R): Currently, we are working in south Brooklyn, east Bronx, and the Idlewild watershed communities in Queens since GOSR’s focus is on the communities that organized after Hurricane Sandy. At first, we were looking at how we can help with immediate recovery in the most impacted communities, but then the intent was to help as many low-income folks as possible. This is challenging to do in NYC because many of the places affected by Sandy were actually waterfront communities with both wealthy and low-income populations; the Rockaways is a good example of this mix. The eastern section of the Bronx is another area which is wealthier than other parts of the Bronx but still lost power. That portion of the Bronx in particular is not an environmental justice community. If we look at the area around Kings Highway, which also has a wide diversity of people, incomes, and building uses, these communities were not as affected by Sandy, but they do have the potential to be more heavily impacted by future weather events as the shoreline recedes.

M.F: Could you provide some background on the assessment process GOSR uses to decide which projects to move forward with and where they will be sited?

A.R: Some projects are classified as ‘urgent need’ (that don’t necessarily target low-income communities), and other areas are classified as low- and medium-income (LMI) communities. GOSR has a team that works on developing metrics that determine which specific communities can be designated as LMI. This ensures that funding for storm recovery is equitably distributed and that projects directly benefit low-income people. However, it can be difficult to find places that meet all of these qualifications. Most of the battery back-up projects we are working on are for community buildings, but we do have one site that is residential with a non-profit that has a home for adults with disabilities.

M.F:  What are the costs associated with simple battery back-up for a building that has solar? Any numbers here are helpful to paint the picture of the expense!

A.R: Usually, for a small 20 kWh lithium ion system, it costs $100k to procure, design, and install the battery in New York City. However, this size typically has limited functionality at a community center and would mainly be used to charge cell phones and devices. They would need a system that is 4 mWh to fully sustain the center during a power outage, and they are proposing moving forward with a 600 kWh system priced at $1.5 million. To put this in perspective, the same system in California would probably cost about a third of the price.

M.F: Do you know of any environmental justice organizations that are engaging in the conversation about batteries and grid vulnerability?

A.R: THE POINT CDC (Community Development Corporation) which serves the South Bronx, a prominent environmental justice community, comes to mind. However, the conversation about batteries can be difficult because of the high costs and technological obstacles associated with procurement and installation. The biggest barrier working against resilient solar in NYC is the fact that current solar and storage technology is very expensive and difficult to site in the city. There are many companies elsewhere accelerating the expansion of more cost-effective battery technology without, for example, having to comply with NYC fire code.

M.F: I know you’ve thought about this a lot—the future of the resilient solar program beyond GOSR. Do you have any ideas about how to move resilient solar forward in NYC? Do you know of other funding streams or agencies that can support resiliency projects now and in the future?

A.R: One unique agency that is working on this is DCAS (Department of Citywide Administrative Services). They are the perfect organization to have an impact, especially in lower-income communities where they are very likely to have a city-based infrastructure. Currently, DCAS is working with GOSR on library projects and is responsible for managing the electric accounts of all municipal bills. DCAS has also looked at solar to power their own sites, and they have a sufficient portfolio where they can do storage for both grid services and backup power. For this kind of large-scale effort to be incentivized, it’s important that the proposed solar projects are multidimensional, meaning that they offer reliable power generation and multiple benefits to the grid and to the community being served.

What’s So Fun About Batteries?!

If you don’t follow energy or environmental news closely, you might be surprised by the breathless enthusiasm surrounding batteries these days. No offense to your vintage Furby, but we’re not talking about AAs – or even the high-tech lithium-ion battery in your smartphone – but a diverse cast of energy storage technologies,[note]It’s not just electrochemical batteries that can charge and discharge energy. We’ll explore some of the many other effective, ingenious, and occasionally bizarre energy storage technologies in a later post. For now, please enjoy this sneak peek:

[/note] built at every scale, from small systems in homes and businesses to football field-sized batteries in the Australian desert.

But first, let’s define some essential terms. Note that in the energy sector, “reliability” and “resilience” have different, very specific meanings. Feel free to skim this section and return later as necessary.

Congratulations! You now know more about energy storage than 99% of Americans. However, you might still be wondering what exactly is so exciting about batteries.